Huffing and Puffing or Just a Lot of Hot Air? 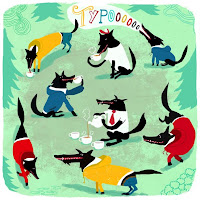 Has anyone else noticed that wolves in books aren't as scary as they used to be?  I don't know much about real wolves, other than the fact that they don't eat foods with ridiculous names like "kibble".  They get to eat things called "deer" or "rabbit".  Plus they don't get yelled at when they pee on the rug. 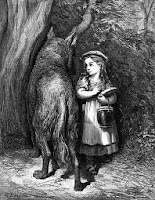 It used to be that book wolves were always scary, like in "Little Red Riding Hood" or "The Three Little Pigs" the way they were originally told.  Now wolves are doing things like eating vegetables or learning to read, maybe even baking cookies for baby chicks (see "The Wolf's Chicken Stew" by Keiko Kasza, a fun book but not one bit scary!).  Maybe you like that better, but maybe you just want to be SCARED and have the hair on your back stand on end!! That can be a fun time sometimes, too.

Here's my wolf-scariness-rating for some books - the more chomps, the scarier it is.

"Lon Po Po: A Red-Riding Hood Story from China" by Ed Young
From the glowing eyes on the cover, to the sharp teeth on the fifth page, and then the picture of the wolf in bed on the 11th page, this is spooky stuff!  Even the three girls look spooky, with their scared eyes, just like the cats when I'm getting too close...  (I got help counting the pages, in case you wondered) 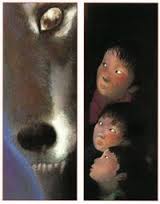 "Little Red Riding Hood" retold and illustrated by Trina Schart Hyman
Sometimes he looks just a little goofy, but there's a real scare when he springs out of bed to snarf down Little Red, and the picture with the huntsman makes me feel a bit queasy.  Plus there's lots of black cats.  Brrrr!

Are these scary?  I'm not the brightest dog on the planet, so I'm not sure.  Parts of them are.  Maybe you are smarter than a dog and can help me figure this out.

"Wolves" by Emily Gravett
Bunny goes to the library, gets a book about wolves.  Bunny starts to read.  Danger, Bunny!  Watch where you're going, check your surroundings, pay attention!...  Oh, too late!

"Wolf's Coming" by Joe Kulka
Tasty animals hear a howl, warn each other that "Wolf's coming!", run for shelter.  Faster, faster, it's getting dark, there's now drool and a large spider, Wolf is peeking through the window...  You'll need to check out the surprise ending for yourself.

"The True Story of the 3 Little Pigs" by Jon Scieszka
Got one chomp for the picture of the sandwich, and the pigs' butts.

"The Wolf Who Cried Boy" by Bob Hartman
"Why can't we have Boy tonight?" asks Little Wolf at dinner, but it turns out in these modern times it is just too hard to find Boy to eat, and Little Wolf does not like the foods Mother Wolf is making.  When he smells her cooking Three-Pig Salad it is just too much!  He pretends he sees a boy and by the time Mother and Father are done looking dinner is ruined and they have to have snack food for dinner.  This trick works a few more times, but then Mother and Father find out he's lying!  So they decide to ignore him the next time, and guess what happens?  I'm not going to tell you, but it has something to do with Troop 7.  So don't do any lying and eat what your parents put in front of you.

"Mr. Wolf's Pancakes" by Jan Fearnley
If a wolf asks you to help him make pancakes don't be rude, and if you are rude, don't ask for any pancakes when you smell them cooking, or SNIPPITY! SNAPPITY! 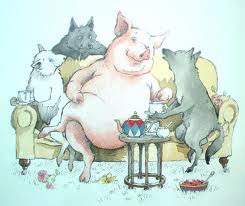 And don't forget "The Three Little Wolves and the Big Bad Pig"!
Posted by Princess at 5:55 PM