The Zoo at the Edge of the World

Winnie reads, “The Zoo at the End of the World,” by Eric Kahn Gale.

This book contains everything: adventure, suspense, danger and LOTS of talking animals!  I would love to be able to talk!  Imagine me, a dog, able to tell my family… when they’re eating delicious, juicy steaks, that YES, I would love a piece too!!!  Or I could tell them how much I love sleeping as close as I can get to them at night!  Or I could tell them that I love looking out the front window and barking at everyone, and everything that goes by, especially other dogs!  Or I could tell them that I really don’t like the pink sweater they make me wear on our walks outside in the winter……..oops!  I’m getting a little carried away.  Back to the story, there is an actual family owned  zoo and it takes place in the 19th century.  There is a Dad who is a world renowned animal explorer and his two sons, and they manage the zoo together.  The youngest son, Marlin has a very difficult stuttering issue to the point where he can barely talk.  However, he CAN talk to the animals in the zoo, and they talk to him.  How amazing!  People come from all over the world to view these animals.  Ronan Rackham, Marlin’s dad, soon comes back from one of his dangerous explorations with a black jaguar.  This changes everything at the zoo!  The jaguar has magical powers that he shares with Marlin.  The adventurous and suspenseful events that follow will keep you at the edge of your couch….where I like to spend most of my time!  Your paws will not be able to put this book down!  It’s that dog-gone good!  Enjoy!

Shane Burcaw is right! Not So Different 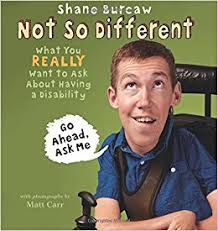 Pick up the book "Not So Different: What You Really Want to Ask About Having a Disability" by Shane Burcaw.  Get it at your local library, or from a bookstore, or from a friend.  Don't stop to sniff a fire hydrant, or pee on a tree - just read it.  It won't take you long, but you will feel enlightened and gladdened by the time you close the cover.

I really did want to know all those things about what it's like to have a disability.  Even though I can read people words I can't speak in people (different voice box!) so I've never been able to ask.  I can't hear anymore either, because of my age in dog years.  It is a darn good thing that I can read and type on a keyboard, because I so want to share the joy of this book.  It is simply brilliant!
Shane is magic, and together with Matt Carr he has created a work of genius, with humor and heart.
Matt Carr took most of the photos, and they get you up close and personal so you feel as though you could be one of Shane's best friends, and you so want to be!  Shane is friendly and smart and honest and funny.

After you have washed your paws and circled around a number of times on the best chair, open up the book and enjoy some of these details - the T-Rex, the family portrait with the game controller and the pee bottle, all the helping hands, 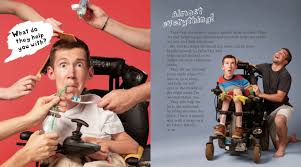 and Shane's brother hanging from the basketball hoop.  Even the end papers are droll!  But the best thing about this book is that Shane doesn't shy away from the tough questions, and he's guessed what kids really want to know.  It only takes about ten minutes to read this book, but those ten minutes might be the most important of your day.

I myself am not a genius, but I am able to make some connections between things I read.  I am going to do that here, and hopefully it will make sense to your human brain.  I read another book the same day I discovered "Not So Different".  It is called "A Boy and a Jaguar", by Alan Rabinowitz. 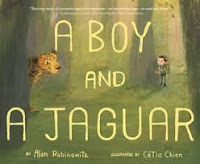 Alan Rabinowitz also writes about himself.  He tells about his early life, and his personal struggles as a stutterer.  He could not connect with kids his own age because he could not talk to them.  School was difficult for him.  Alan could not make the words come out in front of people, but he could sing and he could talk to animals - the pets he had at home, and the lonely jaguar at the local zoo.  He saw that animals were vulnerable, just as he was, because they could not communicate and speak up for themselves.  He made a promise that if he could find his own voice he would be their voice and help to protect them.

Catia Chien made beautiful pictures for this book.  They are expressive and colorful, sometimes dark, and often mysterious.  As Alan grows up he learns how to control his stuttering, and he learns how to follow his dreams.  This is a ten minute book too!  But what a powerful ten minutes, and what a beautiful and inspiring ending!  It made me shiver.

I just read another book that fits in here, called "Joan Procter, Dragon Doctor: The Woman Who Loved Reptiles".  This is a picture book biography written by Patricia Valdez.  Guess how much time it took to read?  You're right!  Ten minutes!  That's just how long I had before I got taken off to the dog kennel. Everyone else is going off on a holiday.  I'd be jealous, but I got to bring along the laptop, and I am also allowed to go out in the play yard with the other older dogs, and sniff their bottoms.
Joan Procter missed a lot of school as a young girl because she was sickly.  Luckily she had best friends - turtles, lizards and snakes.  She was super smart and curious, and this opened doors for her in her life, and allowed her to blossom.  Most women didn't get to blossom back then, in the early 1900s. When you read this book you get to follow along, as Joan immerses her life in the reptiles she loves, even befriending a Komodo dragon named Sumbawa. 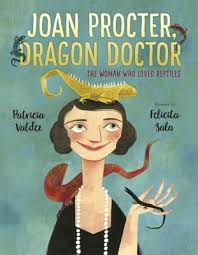 The wonderful pictures in this book will intrigue you.  I've never seen such gorgeous lizards, portrayed with just a bit of whimsy.  Felicita Sala is a self-taught artist, just as Joan Procter was a self-taught zoologist, scientist and artist.  Her illustrations immerse you in a world that is so much more lovely than my room at the kennel, which is just four walls and a dog bed, with a shiny metal bowl.

What do Shane Burcaw, Alan Rabinowitz and Joan Procter have in common?  Personal struggles that just make them more amazing and strong.  The wish to help others, whether they be humanoid or animaloid.  Wonderful books that inspire in a mere ten minutes!  And they've all just had their books reviewed by a dog.