Holly Black, or, "Where Have My Bones Gone?!" 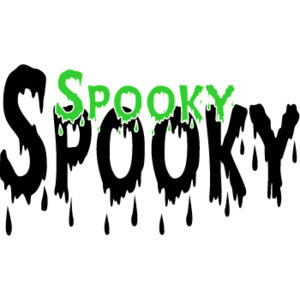 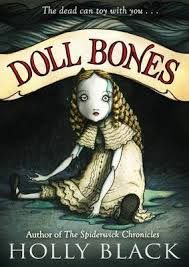 Do you like books about friends?  What about books with kids doing adventurous things, maybe things that  are a little dangerous, things that could happen only in books?  Do you like spooky?  Well, if you're hankering after a book that contains all of those things you need look no further than Holly Black's new book, "Doll Bones".  I shiver just thinking about that doll, and the way she moves on her own.  9 and up is probably a good age to read about what happens in this book.
What does this have to do with bones?  You'll never guess, so I'll tell you just a little!  A girl in the past met a tragic end (it involved a squishy, flattening experience - much like the mole from my last entry).  Her heartbroken father did something really gross and she ended up becoming a part of this doll that three friends, the hero and heroines of this book, find years later.  They have a dangerous and crazy adventure without parental permission, which you should never do!  It makes for a great, adventurous, and spooky story though.

Well, I for one am never going to do that to any bones, no matter how beloved!  It's downright frightening!  I like to sniff at bones, and chomp on them, and dig holes for them, maybe taunt the cats a little...

I guess besides chewing on bones you can also use them to help solve mysteries and crimes!  I didn't know this until I read, "Bones Never Lie: How Forensics Helps Solve History's Mysteries" by Elizabeth MacLeod.  I didn't even know history had mysteries.  Gosh, I don't even know what history is! 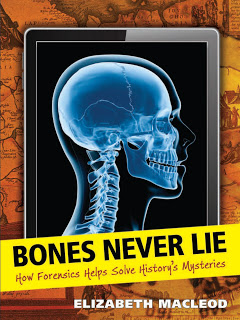 Anyway, this book is so interesting for extra-intelligent dogs and children ages 9 and up.  There's lots of pictures of bones and body parts, and true crime stories involving famous dead people like Napoleon and King Tut and Grand Duchess Anastasia.  How did they really die, and who probably killed them?  Find out about what amazing technology is now being used to solve old cases and new.  I think I'd become a dog detective if I had opposable thumbs.  Maybe I can help just by sniffing and gnawing at the bones.

Don't worry, you can still enjoy books about bones if you are 7 and younger.  Lisze Bechtold wrote a book called "Buster & Phoebe: The Great Bone Game".  This one is not scary, but it does have a little bossiness, some bullying, some lying, some subterfuge.  Turns out not all dogs are upstanding citizens!  Buster is a good boy, and is my favorite color for a dog.  Phoebe is older, with super curly ears, and she does not behave in a virtuous way.  The 'bone game' is not very fair, and let's be honest, Buster is not the brightest bulb in the dog universe.  However, he has heart, and he wins the game in a very satisfying way at the end.  I love the pictures, and there's lots of them. 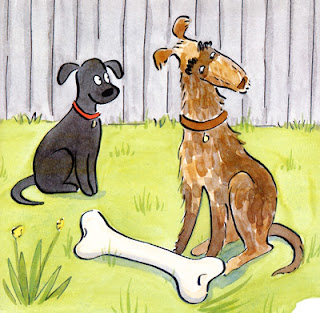 If you are in preschool and you feel like being spooked just a little try "Skeleton Hiccups" by Margery Cuyler.  Skeletons are definitely a little scary, but seeing one trying to drink water upside down to get rid of hiccups is hilarious.  You also get to bark along to the silly hiccup sounds.  This one is a good read right before Halloween, which I just know is probably one of your favorite holidays because of all the candy.  I like Thanksgiving, you can probably guess why - turkey bones! 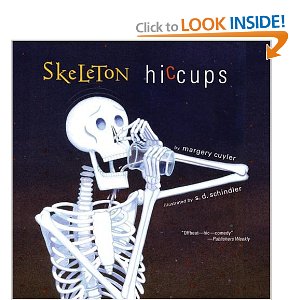